In today’s society, hunters and recreational shooters have the ability to reload their own ammunition. By doing this, people save a significant amount of money when compared to continually buying boxes of new ammunition. The cost, at first, for all the equipment is very high, such that it could deter people from reloading. The reward is when people buy the necessary supplies in bulk which is cheaper per round when the remanufacturing process is complete. Figure 1 depicts a multi-stage (progressive) press that is used by avid outdoorsmen. It is the top-shelf press which is more expensive. However, it is more efficient. 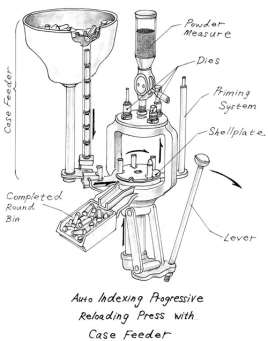 Contrary to popular belief, the preparation stage begins while at the shooting range or while participating in any event that requires a firearm. While people shoot their guns at the shooting range, all of the expended rounds fall to the ground. The expended rounds are then picked up and assessed for damage by the person that will be reloading them. Cracked and/or bent casings will not be used as it allows for an additional liability when firing the cartridge after reloading. The most important part to collecting expended brass is to ensure that the shooter gathers the right caliber of casing. The stage continues as the shooters get back home. All of the collected used casings are loaded into case feeder with the primer of the casing facing down. The selected Die is loaded onto the top of the press. The gunpowder is measured for precision and accuracy before it is placed into the housing. With all of the components setup and in place, the next step is ready.

Although the process of reloading ammunition appears to be very tedious and difficult, with some experience on the equipment anyone could do it. The equipment is designed such that it allows shooters and hunters to be successful when reloading their own ammunition while also remaining safe both during the reloading process and firing the reloaded ammunition. The different stages of the press as stated above all serve a very crucial part in manufacturing one’s own ammunition. As the casings turn, they progress towards something bigger, hints the name progressive press.